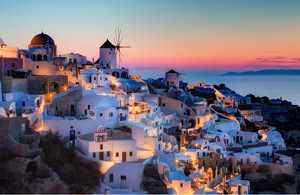 Santorini - the most visited of all the Greek islands, and one of the most favored holiday destinations world wide. Located southerly in the Aegean sea approximately 200 km of Greece's mainland, Santorini joins numerous other nearby islands to form what is known as the 'Cyclades Islands'. The island got it's half-moon shape when a drastic volcanic eruption took place back in the 17th century B.C. which wiped out almost half of the island, therefore carving today's breathtaking caldera. As it stands half of Santorini caldera remains submerged, which makes it the only sunken caldera in the world. The volcano of Santorini still remains active and occasional eruptions have still occurred throughout the previous centuries. This volcano can be visited by boat excursion from the old port of Fira and it is definitely a must-see in Santorini. One of the most astounding things that defines Santorini is the astonishing architecture of the villages, built right on the edge of the caldera.

These pretty villages distinguish for their 'sugar-cube' houses, the cobbled paved narrow streets, the gorgeous churches and most of all the spectacular views across the deep blues of the Aegean Sea. The endless beauty and charm of Santorini has inspired many writers and artists as well as filmographers who regularly choose this island for shooting their movies. It is true to be said that Santorini offers much more than the vistas made famous on postcards — its wonders include countryside wineries, ancient archaeological sites, and unforgettable beaches

"a scenery, unlike anything you’ve seen before!"

Fira is the capital of Santorini and by far the biggest and most cosmopolitan settlement of the island. The city is located in the western edge of the island and directly opposite the volcano. Fira is a combination of natural grace, shopping, nightlife, strong culture and deep history. What makes Fira so wonderful is the Caldera view that leaves travelers lost for words at any given time of the day. There is a rich variety of restaurants, cafes, bars and clubs where you can relax and enjoy the atmospheric views or dance through to the sunrise!

Santorini's delightful hotels, exquisite restaurants, striking rocky landscape, and the volcano are just some of the reasons you will fall for this mesmerizing and distinctively individual island!

Things To Do and See in Santorini

Travelers are able to visit the active volcano of Santorini by taking one of the daily excursions via boat. Once at the volcano you can walk upon the rock hard black lava and explore the whole surface area, passing by sulfur steam excreting from the grounds, reaching to the top of the crater to enjoy a breathtaking panoramic view - this is truly magnificent and one to add to the bucket list!

Recently re-opening its doors for visitors in 2013 the archaeological site of Akrotiri is one of the main attractions of Santorini. Situated on the southern side of the island and thousands of travelers come every year to get an insight of the historic gems the island holds. After several excavations archaeologist believe that the town was initially constructed around 4,500 B.C. but in the early 17th century B.C. it was demolished by an earthquake. Shortly afterwards a new town was built on the ruins of the previous until it was also destroyed by yet another volcanic eruption almost one century later. At the time the town sat in a prime location, it served as a safe port therefore gaining an important role in trading. Today the site is covered by a bio-climatic roof and walkways are suspended above the archaeological remains, allowing the visitors to walk among the two and three-storey buildings. History and archaeology lovers this is is a must.

Ancient Thera is an ancient city and capital that rests on a rocky headland approximately 350 m high on what typically referred to as the 'Messavouno' and located between two well-known beaches of Karmari and Perissa. It was named after the mythical ruler of the island, Theras, and was occupied by the Dorians from the 9th century B.C. until 726 AD. The ancient city consisted of a street roughly 800 m long in length and especially wide - reaching out in a south eastern direction and containing numerous eye-catching buildings. All of the buildings were constructed using local limestone of the mountain itself. Take a tour to the Ancient Thera, enjoy unraveling historic stories of ancient past times whilst overlooking a panoramic view of the surround islands.

The Museum of Archaeology of Santorini is centrally located in the capital of Santorini, Fira. The museum holds many exhibits which reveal the strong depth of history this island holds. The museum is home to numerous unique collections of sculptures and inscriptions from the Archaic to the Roman period, as well as ceramic vessels, vases and gorgeous marble figurines that date back to the Hellenistic era.

Church of The Holy Cross

Centrally located in the main square of Perissa, just above the beach, The Chuch of Holy Cross is known to be one of the largest churches in Santorini. The church was initially constructed in 1835-1840, but after the drastic earthquake in 1956, the church underwent reconstruction. This reconstruction uncovered the foundations of two three-aisled basilicas, which showed that the original church was built directly on top of them. Today, the church of Holy Cross distinguishes due to its gorgeous, big bell tower, the prominent blue dome and its spectacular size. Each year on September 14th locals come to celebrate a traditional panigiri with food, drinks and a religious ceremony.

Santorini is factually one of the best destinations on earth when it comes to dramatic views and atmospheric sunsets. A visitor to the island fallen in love with the bewitchingly enchanting sunsets that can be savored from many vantage positions in the island. A unique way of experiencing the Santorini sunset is by undertaking a sunset cruise on a traditional Santorini boat. Most of the harbors of the island organize regular sunset cruises and it is a sheer delight to be on board and witness the beautiful and dainty sunset.

The most popular resort of Santorini is known as Oia. It is defined by its beauty, atmospheric sunsets and some of the worlds leading luxury hotels. It is most definitely the most mesmerizing and pretty village of the island. The village is situated north of the island, roughly 12 km from the Capital Fira. Oia sits on the top of an spectacular cliff and provides magnificent views across to the island of Thirassia and Santorinis famous active volcano. The sweet village of Oia is more of a traditional village in comparison to Fira and features small houses clustered along narrow cobbled streets, blue-domed churches, shops, cafes, restaurants and traditional tavernas. Oia enjoys numerous cultural attractions such as museums, a fortress and many art galleries.

The Capital of Santorini best known as Fira is the most important and influence village of the island. Fira is situated on the western coast of the island - approximately 9 km from the Athinios, the main port. Fortunately some of the buildings from the 18th century were saved despite the drastic earth quake in 1956 which is one of Firas charms. The town is a typical Cycladic village consisting of white washed houses with deep blue windows and doors, narrow cobbled streets and numerous blue-domed churches scattered across the town. Fira offers an endless selections of shops, jewelries, tavernas, restaurants, cafes, bars and nightlife which never sleeps.

The village of Imerovigli is located on the northern coast of Santorini, only 4 km from the capital of Fira. The name of Imerovigli originates from the word vigla which means "view spot". The positioning of the village offers an unobstructed view of the caldera and the volcano. Imerovigli is totally beautiful and is considered to be a very popular destination choice for travelers. Imerovigli is home to several churches, chapels, restaurants, cafes all of which enjoy breath-taking views. This village is known as a super romantic destination.

Located on the south eastern coast of Santorini sits the village of Akrotiri. Ampitheatrically built, one will find impressive houses dotted around the village as well as a traditional windmill and the Venetian castle which dominates the settlement of Akrotiri. Today Akrotiri remains unspoiled by mass tourism and considered to be a destination for those seeking to escape the hustle and bustle.

Emporio village sits at the foot of Mount Prophet Elias, 12 km from the capital Fira and is known to be the largest settlement of Santorini. The village features two pretty blue-domed churches with grand bell towers which stand at the entrance of the village. Most of the houses have been well-maintained and remain intact. Emporio village has a very strong medieval character and charm - it feels like stepping back in time.