About Mykonos | Mykonos holidays | The Travel Corner
Please wait while we are searching for your accommodation ... 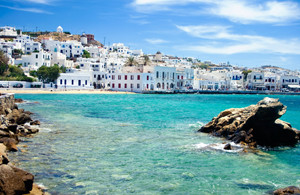 Mykonos is best known as the most famous cosmopolitan Greek island lying between Tinos, Syros, Paros and Naxos. According to Greek mythology, Mykonos was believed to have been named after its first ruler, Mykonos, the grandson of the god Apollo and a local hero. The island is also said to have been the location of the Gigantomachy, the great battle between Zeus and Giants and where Hercules killed the indestructible giants having lured them from the protection of Mount Olympus. The large rocks found all over the island are said to be the petrified corpses of the giants.

Get lost in a whitewashed paradise full of ancient traditions, historical stories and beauty. Mykonos is extremely enchanting and well known for its bare hills, the attractive sandy beaches, the white country chapels and the Cycladic architecture.

The Town of Mykonos, called Chora is a classic Cycladic village built in an amphitheatrical style. It has beautiful whitewashed cubic houses with colorful wooden paneled doors, windows and balconies, narrow streets forming a labyrinth, pretty churches and all shades of purple bougainvilleas contrasting with the bright white of the buildings' walls.

The city centre is blocked off from traffic most of the day which makes the walk among the pedestrian maze of narrow cobbled streets particularly pleasing. The main town can easily be explored all on foot. The main street of Matogianni or "Matoyanni" is lined with small chic boutiques, souvenir shops, fine jewelers', restaurants and bars all leading towards the waterfront. There are numerous churches, archaeological, nautical and folklore museums in which one can learn some of Mykonos' history.

Things To Do and See in Mykonos

Little Venice Mykonos is one of the most picturesque and romantic spots in Mykonos. This neighborhood is filled with chic and elegant old houses which are located precariously on the edge of the seafront. Thousands of travelers come to Mykonos to seek the beauty and charming atmosphere of Little Venice, somewhat describe it to having a magnetic appeal drawing travelers time and time again. There are a variety of cafes, bars and restaurants spread along the waterfront. Little Venice is known to be one of the best places to go during sunset - as long as you arrive early enough to secure a great table that is perched right by the waterfront to enjoy a gorgeous sunset over an exquisite meal.

The windmills of Mykonos are one of the quintessential features of Mykonos landscape and prove to be a living testimony of the island's use of innovation when it came to tapping the enormous power of the wind to grind Mykonos agricultural produces. Most of these windmills were built and constructed by the Venetians in the 1600's. As of now, the windmills are no longer operational but gazing at these gives you a chance to witness a part of the island's rich chivalrous history.

The Church of Panagia Paraportiani is located right by the seafront in the neighborhood of Kastro, in the town of Chora and is considered to be among the most photographed churches not only in the island of Mykonos but worldwide. Its name "Paraportiani" literally means "standing next to the entrance door" meaning that the church was located next to the Castle door. The unique thing about this church is that it is actually made up of 5 small churches that were built one on top or next to the other. The 5 churches were not constructed at once, but gradually throughout centuries and combine four different architectural styles involved such as: Byzantine, vernacular, traditional and western style.

Delos is a small rocky island located a few miles south-west of Mykonos and is considered to be one of the most important mythological, historical and archaeological sites in Greece. According to Greek mythology, Delos island is the birthplace of Apollo, the god of music and his twin sister, Artemis, the goddess of hunting. Not only is the island of Delos history itself, it is an experience of a lifetime, a mysterious island hosting a series of monumental antiques from the Archaic, the Classical and Hellenistic period on a territory used exclusively as an archaeological site. Undeniably, this is a destination for your bucket list!

The Pelican named Petros (Peter) has officially been declared as the mascot of Mykonos. Petros has made Mykonos his home since 1954 and enjoys the several waterways Mykonos provides to indulge in fun and frolic which is much appreciated by both the residents and travelers alike who never seem to have enough of the pelican. You can get a glimpse of the cute bird as it strolls leisurely in his own unhurried pace through the cities labyrinth streets.

Super Paradise Beach is situated right next to Paradise Beach and reachable by taxi-boat (regular boat services are available from Platis Yialos) and local bus services. It is considered as one of the most beautiful and must go to beaches in Greece! The beach enjoys beautiful crystalline waters and warm golden sand. There are several facilities available at this beach such as water-sports, bar/restaurant and comfortable sun loungers and parasols and hosts regular day and night beach parties. Due to its popularity, Super Paradise Beach can get very crowded during peak season.

Kalo Livadi Beach is one of the longest sandy beaches in Mykonos and offers a variety of popular facilities as well as hosting regular beach parties. The beach is well-organized with comfortable sun loungers and umbrellas to shade you from the hot sun. Kalo Livadi is a popular beach choice for families due to the shallow and clear waters and the tranquil, quiet atmosphere. You will also find various tavernas along the beach all serving a fresh and traditional cuisine.

Enjoy exploring the hidden secret of Mykonos and visit landmarks accessible only by jeep. During a jeep safari tour you will get to see what few people see in Mykonos such as breathtaking sea views, rural countryside, secluded secret beaches and coves and track roads. The unique thing about this tour is that you can actually drive the jeep yourself, if you please! During the tour you stop off at places such as Houlakia beach, Panormos beach, Agios Sostis and Ano Mera before returning to Mykonos Town.

Aghios Stefanos is located within a short proximity of 3 km from Mykonos Town and can be easily reached by bus, car, motorbike or taxi. The beach of Aghios Stefanos is well developed with several comfortable sun beds, parasols, cafes, restaurants and traditional tavernas serving daily freshly caught fish and homemade dishes. There is also water sports available at this location. The beach is named after the pretty church with the red roof that you see at the end of the beach. You will find a variety of accommodation options such as very high end, stylish hotels as well as comfortable self-catering apartments and villas.

Kalafati is a low-key coastal village located within a short 25 minuet drive from Mykonos Town and considered to be one of the quietest and calmest beaches and resorts of the island. Kalafati is the home to the beach of the same name, on a bay that is favored for sailing, windsurfing and scuba diving to nearby shipwrecks. Kalafati sits hidden away from the more touristy beaches, and remains less developed and more tranquil. High-end open-air bars and seafood restaurants are scattered along the shore, with an option of more casual, traditional tavernas and pizzerias located slightly inland. Rocky coastal trails lead to nearby Agia Anna Beach, where fishing boats float off the adjoining marina and Santa Anna church overlooks the Aegean. There are a variety of accommodation options located within this lovely fishing village from self-catering apartments, luxury villas and chic hotels.

Located within 7 km from the airport, Ano Mera is the second biggest village after Mykonos Town "Chora" and is one of the oldest villages of the island. It offers a variety of luxurious hotels and comfortable self-catering apartments as well as luxurious villas. Ano Mera is a slow paced yet vibrant village where locals are continuing their every day life and traditions without being interrupted by a crowd of tourists, as it happening in the capital. Nearby to Ano Mera is home too the fascinating 16hth-century monastery of Panagia Tourliani which houses a magnificent collection of icons as well as holy vessels and vestments. The wonderful bell-tower and marble fountain are in the courtyard of the monastery and are worth putting on your list to see! A range of bakeries, traditional tavernas and cafes with comfortable outdoor terraces on narrow cobbled streets have a rustic-chic vibe. Enjoy several walking trails all of which lead into the surrounding landscape of rocky hills and down to nearby sandy beaches.

The developing coastal village of Tourlos is home to Mykonos New Port, with busy waterfront bars, cafes, restaurants and traditional tavernas catering to visitors arriving on ferries, cruise ships and high-end private yachts. Wealthy celebrities take summer breaks at the hillside villas and bring a glamorous vibe to the restaurant terraces overlooking the bay. Nearby Agios Stefanos Beach forms the core of a buzzing resort area popular for water sports.