About Kefalonia | Information for Kefalonia | The Travel Corner
Please wait while we are searching for your accommodation ... 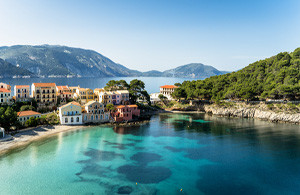 A holiday in Kefalonia offers a truly different Greek island experience. Rugged, mountainous but blessed with some of the best beaches in the Ionian, Kefalonia has a grandeur that is unequalled by any of the other islands.

Fortunately for those looking for a more peaceful and relaxing holiday, Kefalonia has resisted the sort of tourism that has overrun some islands. Whilst the number of visitors is steadily rising (thanks in no small part to Louis de Berniere's famous novel and film, 'Captain Corelli's Mandolin'), a great virtue of its size is that it can comfortably absorb them.

With its beautiful sandy beaches and small seaside resorts, impressive mountainous landscapes and beautiful forests, a holiday in Kefalonia offers a more beguiling, peaceful ambience which makes a welcome change from some of the larger, more commercialized resorts on other Greek islands.

Things to see and do in Kefalonia

You’ll need a car to get to Petani Beach on the Lixouri peninsula – it’s reached down a steep road that zig-zags from the cliff top. It’s set in a horseshoe-shaped bay, edged by a curve of sand and white shingle. There’s a couple of beach side tavernas for lunch and drinks. Hang around until the evening – the beach faces west and is a great sunset viewpoint.

Kefalonia is the perfect base for exploring. With so many islands nearby, you’re spoiled for choice when it comes to days out. Search for loggerhead turtles in Zante, set sail for Ithaca, the ancient kingdom of Odysseus, or scale the heights of mountainous Lefkas. There’s Aristotle’s old stomping ground, Skorpios, to think about, too, and the island of Meganissi.

Every Kefalonia wine menu will offer you a glass of crisp Robola. It’s on the top of the list of of Greek white wines, plus the grape is grown all over the island. One of the main wineries is the Robola Wine Co-operative, set in the beautiful Omala Valley, located about half an hour from Lassi. Its well worth paying a visit to find out what goes on behind the scenes and to enjoy a tasting session.

Myrtos Beach isn’t considered one of the world’s finest for nothing. This swathe of sand, about a 40-minute drive from Lassi, had a starring role in Captain Corelli’s Mandolin. The road above has been widened so passing motorists can admire the view without stopping traffic. And the twisting street down to the shore is well worth the hair-raising ride – at the bottom you’re greeted with white pebbles and neon seas.

There’s plenty to see in this terracotta-roofed city – it’s packed with tavernas, souvenir shops and leather boutiques. When lunchtime approaches, take a stroll down to the harbour, where little fishing boats bob up and down in front of restaurants serving up local delicacies.

Spend an evening in the town centre, stroll along the waterfront or soak up the atmosphere in the lively town square. There are plenty of bars and coffee shops to choose from, so whether you’re after a cocktail or a coffee you’ll find it here. There are lots of boutiques and shops, too, so you’ll have loads of opportunities to part with your euros.

A delightful place in which to spend a quiet, relaxing and totally enjoyable Greek island holiday. Set against the impressive backdrop of Mount Aenos, Lourdas Bay boasts some of the best sandy beaches on Kefalonia.

Lourdas Bay is one of the largest bays of Kefalonia and is fringed by over two miles of sand and pebble beach. It is a wonderful place for walkers and hikers. With the backdrop of the pine forest and cypress trees of Mount Ainos, this makes a wonderful walk through the local village and down to the beach for swimming, in the amazingly blue sea. The few tavernas situated by the beach at Lourdas, offer locally caught fish and the vegetables are grown on their own plots of fertile land, alongside the beach

This small fishing village has grown up into a modern seaside town. There are restaurants, tavernas and cafés along the main street, leading up to a long sandy beach. Up in the hills behind the new town are the ruins of the old village, plus there are Roman ruins nearby including a 7th-century BC Temple of Apollo. There’s some top-notch hiking too, like the 8-kilometre coastal walk to Poros.

Skala’s sand-and-shingle beach is considered the best in southern Kefalonia – it goes on for 3 kilometers and backs onto pretty pine woods. At the southern end are caves and rocks to explore, as well as secluded coves. Above the sands, meanwhile, is a Roman villa dating back to the 3rd century AD. And when you want drinks and snacks, the shops and tavernas are just 100 yards away.

Kefalonia’s most famous landmark is the Drogarati Cave, said to be 150 million years old. Being 37 meters below ground and lined with dripping stalagmites, it’s certainly dramatic. You’ll find it in Sami, 45 minutes away. The town is also home to Antisamos Beach, the beautiful bay that starred in the film Captain Corelli’s Mandolin. You can easily do both in a day.

The sunny bay of Spartia is situated at the bottom of a flowery hillside and protected by outcrops of rock. There is a pretty beach with clear aquamarine water and soft white sand and a small jetty and harbor.

Set on the south coast of the island, between the airport and St Thomas, this pretty little village is slightly inland from the coast where our villas are located. Spartia enjoys several wonderful tavernas, cafés and a mini-market, of which have various opening times outside peak season. Further down along the coast from Spartia, a small ferry port connects Kefalonia with its neighboring island, Zakynthos.

The charming village of Svoronata has everything - fine beaches, beautiful surroundings and good food - Svoronata is a sleepy resort that will hold particular appeal for those wanting a peaceful holiday on Kefalonia.

The small resort of Svoronata lies between Lassi and St. Thomas Bay. This sleepy village retains much of its traditional Greek charm and offers a handful of bars, tavernas and mini-markets scattered around the countryside of which some may have various opening times outside peak months. With its rocky shoreline and inland olive groves, Svoronata is a very scenic and unspoiled location – the perfect place to relax and unwind. This picturesque coastal village offers a convenient location close to the airport which can be found within a 10 minute drive.

Situated between the tiny harbor of Pessada and Lourdas is the fertile valley of Trapezaki which is home to some of the best beaches on Kefalonia and makes a perfect base for exploring this stunning Ionian Island.

Trapezaki is the perfect place for a laid-back, away-from-it-all holiday. Set in beautiful countryside halfway between the resorts of Lassi and Skala, our villas are located on a hill surrounded by olive groves - with a stunning backdrop of Mount Énos. A small selection of mini-markets and tavernas can be found scattered around the resort. Unspoiled and undeveloped, Trapezaki beach is just one kilometer away. Set in a rocky cove, here you will find fine sand and crystal clear waters.

With some of the best beaches on the island and a plentiful selection of bars, restaurants and shops, Lassi has become one of Kefalonia's most popular resorts and is a favourite family holiday destination.

Motor boat cruising in the area, offers coastal cruising from Makris Yialos beach to Platis Yialos beach and the beach of Torkopothero. Beyond are some coves with dramatic white rocks only accessible by boat. Or you can visit Vardiani island, locally known as the rabbit island. This tiny island, whose only inhabitants are wild rabbits, has an abandoned monastery and is surrounded by rocks which are great for snorkeling. An alternative coastal cruise would be hugging the coastline towards Argosoli, past the famous lighthouse and water wheel at Katavothres. Opposite Lassi you can see the Pali Peninsula famous for its red sand beaches. Take a motor-boat to cruise over to Meggas Lakas or Xi beach famous for its red sand and mud-baths.

The area is good for couples and families whose ideal holiday is spent centered around the beach with a local taverna meal in the evening. There is usually some low key entertainment in the form of a Greek night or live band playing in one or more of the Lassi tavernas throughout the summer and the bars stay open late with sound-proofed doors to keep the sleeping neighbors happy. It's just a short taxi ride or 25 to 45 minutes' walk into the lively Greek town and port of Argostoli so Lassi makes an ideal base for exploring the rest of the island as well as visiting the capital and transfer time is only 15 minutes by taxi from the airport.

In the year 2000, the small town of Sami, half an hour from Lassi, was invaded by Hollywood for the filming of Captain Corelli’s Mandolin. The front of the town became the Argostoli waterfront, and a replica of the old town was created in the