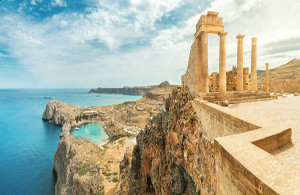 Rhodes is the biggest of the Dedecanese islands of Greece and considered to be the island group's historical capital. It is located northeast of Crete and southeast of Athens. Rhodes' nickname is "The Island of the Knights", named after the Knights of Saint John of Jerusalem, who rules the island from 1310 to 1522. Historically, Rhodes island was very famous worldwide for the Colossus of Rhodes, one of the Seven Wonders of the Ancient World.

A scenery full of conspicuous, rich natural beauty, an ample of history and endless attractions make Rhodes on of the most popular holiday destinations in Greece. Extensive golden sandy beaches, crystalline waters, castles and ancient civilizations, traditional tavernas serving a variety of local delicacies and gourmet restaurants is found everywhere throughout the island.

"Endless beaches and unspoiled islets, castle ruins and ancient civilizations, cosmopolitan but at the same time raining intact, the Dodecanese island are above all enchanting and hospitable"

In Rhodes you will easily find accommodation for every taste. This includes large high quality hotels, luxurious all-inclusive resorts, chic boutique hotels, self-catering villas and apartments - no matter your style, your vacation on this Aegean island is guaranteed to be one to remember!

The atmospheric Old Town of Rhodes is a labyrinth of cobbles streets that will draw you back to the days of the Byzantine Empire and beyond. The Old Town of Rhodes, with the Palace of Grand Master, the Street of Knights and the old port of Mandraki and Hippocrates Square, are the most must see places on the island. In the south, you will find the gorgeous town of Lindos, complete with their ancient Acropolis, sandy colored houses which gently blend down into the turquoise bay.

It has been said that Rhodes was the first island in the Aegean to produce wine therefor there are plenty vineyards throughout the island all of which invite you to try the exquisite produces.

While both Lindos and Rhodes Old Town get very crowded in summer, Rhodes is large enough to allow plenty of room to breathe that pure warm, sweet Aegean air.

Things To Do and See in Rhodes

The ancient town of Lindos, approximately 45 km to the south of Rhodes Town, was founded by the Dorians in the 10 century B.C. The archaeological remains found inside and around the Acropolis of Lindos unravel the wealth of this ancient town. One of the "must see" monuments is the Doric 4th-century temple which was devoted to Athena Lindia, believed to be where people would worship their patron goddess with offerings and sacrifices. Another fascinating point to state is that it was built on the remains off another previous temple. While visiting the Acropolis you will also have the chance to see the remains of a theater believed to hold over 1,800 spectators, the Four-portico building which holds up to 1,700 spectators and to have been built for religious ceremonies. The site today belongs to the Greek Ministry of Culture and much work is currently being done, by both Greek and foreign archaeologists to protect and reform this gorgeous, iconic monument.

The Palace of Grand Masters is situated at the end of the Street of Knights in the Old Town of Rhodes. Initially built on the foundations of the Temple of Sun God 'Helios', this palace was the residence of the governor and administrative centre in the Medieval times. It consisted of 158 rooms, although presently only 24 are open to visitors. All rooms of the castle have antique furniture of the 16h and 17th century, elegant colorful marbles, sculptures, carpets and fine Oriental vases. Several of the walkways are paved with a mosaic of ancient Roman and Byzantine art - in addition, the interior outside yard is adorned with several intact statues of the Greek and Roman period. The Palace of Grand Masters is definitely an attraction to add to your bucket list!

Filerimos Monastery known to be the Monastery of Panagia Filerimos is found in an elevated position above Ialyssos, approximately 10 km from Rhodes Town. The monastery is dedicated to Virgin Mary the Life-Giving Source and its architecture is more individual in comparison to the typical monasteries found throughout Greece. Filerimos was constructed by the Knights of Saint John in the 15th century using a stone in a Gothic style, on the side of a previous Byzantine monastery. Today the Monastery remains intact and almost unaltered. In the entrance there is a long stair way which leads up to an avenue of lush cypresses and bougainvillea to the cloister of the temple. The Early Christian basilica, and the small subterranean Byzantine church are open to the visitors.

Formerly the Acropolis of Rhodes looked onto the western part of the city. The Acropolis of Rhodes was filled with Sanctuaries, enormous temple premises, and public buildings. The buildings were strategically built on perpendicular terraces that were ably supported by impregnable walls. While visiting the Acropolis of Rhodes you will also stumble across some of the most significant monuments discovered by archaeologists such as: The Temple of Atheana and Zeus, Nymphaia, Odeon, The Temple of Pythian Apollo, Stoa Building, The Stadium, The Gymnasium and The Library. Only few surviving remains of the Acropolis exist to provide a vague idea of its original magnificence and glory. Still, it is definitely worth a visit.

The Archaeological Museum is situated in the Old Town of Rhodes and houses in the Medieval building of the Hospital of the Knights, int he Palace of the Grand Master. The erection of this building began in 1440 by Grand Master de Lastic and it was finalized in 1948 by Grand Master d'Aubusson. Further to this the building underwent renovations in the early 20th century by the Italians, as as the whole Medieval Town of Rhodes. Today the Museum if filled with a variety of findings from excavations all over the island and some small islets of Dodecanese. There are also gorgeous mosaic floors still in place from the Hellenistic times and funerary slabs of the Knights. If you are a history lover this is a must see!

Located in the western side of Rhodes island, approximately 25 km from Rhodes City. Butterflies Valley is a natural reserve, distinctive of its kind. The valley is both rich with vegetation and picturesque due to its waterfalls. Every year from May to September the valley gets engulfed in with butterflies of the Panaxia genus, species Quadriplegia Pod bringing thousands of visitors to come watch this beautiful display of nature. Small, wooden bridges cross the river and an uphill path leads to the Monastery of Panagia Kalopetra. This pretty valley accounts for a brilliant destination for an excursion with an option to enjoy a lunch or beverage in one of the traditional tavernas while overlooking the waterfalls.

Ialyssos - formerly one of the three earliest city-states of Rhodes. Ancient Ialyssos is strategically located approximately 10-15 km from the current town of Rhodes. As a safeguarding measure in the year 480 BC, Ancient Ialyssos established a confederation with the two other city-states. The three cities combined together shifted the capital of Rhodes to where the modern Rhodes Town sits today. In the past, there stood a Christian basilica that was constructed practically right on top of it. Later, the basilica was replaced by a Byzantine monastery that dated right back to the 6th century. The Byzantines were later captured by the Knights of St. John. The Knights detained the monastery to themselves and structured their capital in the place of today's current Rhodes Town. Here you will find Catholicism in all of its glory.

Ancient Kamerios is situated on the northwest coast of Rhodes island, approximately 40 km from Rhodes Town. Kamerios was one of the most powerful towns in the ancients times along with Lindos and Ialyssos, together they formed the power city-state of Rhodes back in the 6th century BC. Today, only a few remnants still stand from the once before magnificent town. Ancient Kamerios was constructed on three levels. On top of a hill, there was the Acropolis which held the temple of the goddess Athena Kamerias. There was a reservoir built in the 6th century, large enough to cover the requirements of roughly 400 families. A veranda with two rooms of Doric columns surrounded the reservoir. Lastly, the lower level consisted of a Doric temple dedicated to Apollo and the Agora, the place where political issues were discussed and resolved. For any history or archeology lover visiting the haunting remains of Ancient Kamerios is most definitely worth adding to your list.

The well-known village of Lindos is considered to be the most pretty and pleasing villages of Rhodes and is located south of the capital. Lindos is overlooked by a spectacular and dramatic ancient acropolis that lies on top of the hill. Lindos best known for its prime location, exquisite dining options and gorgeous surrounding beaches. The village itself is built in an amphitheatrical way and is made up of whitewashed houses with old pebble paved narrow streets and contrasting buildings influenced by Byzantine, Medieval and Rhodian architecture. Aside from the magnificent acropolis that can be reached by foot, one of the top attractions of Lindos is the old theatre of the town and the Doric sanctuary of Athena Lindia which are both worth visiting. A variety of accommodation options of all categories such as self-catering apartments, villas, boutique hotels can be found in the enchanting Lindos.

This captivating city is split into two parts: the Old City or the Medieval and the New City. The Old City is ringed by strong stone walls and is known to be one of the biggest and well preserved Medieval settlements of Europe. This protected city is full of buildings which hold a great sense of the island's history from the ancient, Byzantine, middle ages and the Turkish rule. Among all the architectural wonders the city holds, some palm trees and elegant fountains are an additional charm to the unique Old City. Step across to the New Modern City and you will be presented with buildings mostly all of which were constructed during the Italian rule. Several luxurious hotels of the town have followed a design of modern aesthetics, coordinating with the grand Italian buildings. The City of Rhodes features all kinds of accommodation options, several bars, cafes, restaurants, traditional tavernas, shops, nightlife, and a lot of history!

Southern located and known to be one of the largest villages of Rhodes, Afandou is surrounded by flourishing, fertile landscapes. The village is believed to have got its name from the word 'afondos' which means invisible in Greek, due to the fact it was constructed out of sight from the sea, in order to remain safeguarded from the pirates. There is a pretty central square in the heart of the city, surrounded by numerous cafes and bars. The village provides a lovely selection of traditional tavernas, restaurants and shops to enjoy. The village is located within a short distance of approximately 1 km from a beach of the same name. The sand and pebbled beach with crystalline waters; that spreads for over 4 km has been awarded by the EU Blue Flag for its cleanliness. Several accommodation options that will fit for all are available in the picturesque villa of Afandou.