About Parga | Information About Parga | The Travel Corner
Please wait while we are searching for your accommodation ... 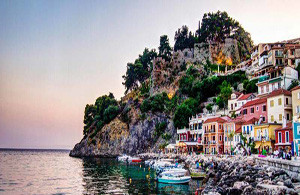 Parga is a holiday destination which offers an unbeatable mix of scenery, beaches and historical sights. Parga is located in Greece’s North Western Preveza region, sandwiched between mountains and a sweeping bay, it is one of those seaside destinations you see on postcards. Colorful boats bob in the harbors, tavernas spill out onto cobbled streets, and whitewashed houses cling to the steep hillsides. It’s no wonder this place is as popular with the Greeks as it is with foreign holidaymakers. With a convenient location in western Greece, Parga is a good base for day excursions to Sivota, Preveza and even Lefkada.

Days in Parga Town can be very relaxing, with eating and shopping being the favorite things to do. Stroll through the narrow alleyways and you’ll stumble upon postage stamp-sized stores, family-run meze bars and crumbling old churches. If you’re after the classic combination of sea and sand, meanwhile, Parga Town has its own little beach, just 5 minutes from the harbor. And the golden shores of Valtos Beach are just a short taxi boat ride away.

Parga Town has the majority of the accommodation in the area. Though there are some large hotels in Parga Town, accommodation mostly consists of studios, self-catering apartments and traditional rooms to rent. The large hotels of Parga in Greece offer luxurious facilities, including pools and spa therapies. The nearby beaches of Lichnos and Valtos also offer some good accommodations to stay during your holidays in Parga, mostly small hotels and family apartments right by the beach. 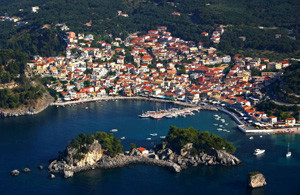 Parga is an town of mainland Greece which belongs to Epirus region. Parga Greece is mostly famous for the fabulous beaches in the surrounding region. The most beautiful beach is Valtos, an enormous bay with blue green water and tourist facilities. Lichnos and Sarakiniko are also fabulous beaches, apart from the Town Beach that usually gets very crowded. A boat from the port of Parga Greece connects Valtos, Lichnos and Sarakiniko to the town. Do not miss the delicious restaurants spread along the port and the beaches of Parga. Interesting sights to visit during your Parga holidays is the Venetian Castle on top of a rock above the town and the Ottoman Castle in Anthoussa. A place of amazing natural beauty is the springs of River Acherontas, surrounded by lush greenery. From these springs start trekking paths in the mountains.

It is one of the most beautiful beaches in Epirus, where the deep blue water gets combined to the green of the olive trees. You will have the chance to practice some unusual water sports there, such as diving, scuba diving, jet skiing, surfing and snorkeling, among others. Those who prefer tranquil activities, like sunbathing, can also feel very comfortable in Lichnos. You will find some good cafes and taverns in Lichnos beach, in addition, there is accommodation to rent, an organized camp and a mini-market. As there is no nightlife on this beach, tranquil walks in the nightfall are recommended. Lichnos may be a little busy in the daytime due to its amusing activities but the sunset gives the opportunity to enjoy a quiet environment.

The springs of Acheron River is an area of outstanding natural beauty located at the border of Thesprotia and Preveza, close to the villages of Kanalaki and Glyki. Apart from the natural beauty, the springs of Acheron is known worldwide for its mythological contents. In ancient Greek mythology, Acheron was one of the five rivers of the Greek underworld. According to the tradition, Zeus was devastated when the Titans drunk from the water and then he condemned the river to remain eternally under the earth while its water became darker. Acheron River is located 25km from Parga, in a beautiful surrounding with rich vegetation and crystalline waters which comprise a unique natural landscape.

It is actually one of the least known places in Parga thus it retains its unspoiled natural beauty and secret energy. It flows from the mountains of Souli Epirus and after a long way it reaches the Ionian Sea in Ammoudia beach. Just a few km away from the sea, there is a forest with planes growing in the water, looking almost exotic due to their weird shape. After you cross the forest, you will see the edge of the river, reaching the imposing roman bridge, an ideal place for picnic.

Valtos beach is found to the west of Parga, down the hill where the Venetian castle was built. It takes just a 20-minute walk to get there from the town and it is also accessible by car, bicycle or boat. It is considered as one of the best beaches in Greece. Have in mind that, in summer, there is a water-taxi service from Parga harbor to Valtos, which may result very convenient. Valtos is a large beach with a 3 km long coastline. So no matter how crowded it gets, there is always room for everyone. It has small, soft pebbles, a lot of greenery in the surrounding area and clear, deep waters. As for the facilities offered, this beach is obviously well-organized and gives the chance to do many different water sports, such as jet-skiing. Valtos beach also offers banana rides and pedalo and canoe rentals to explore the Ionian Sea. If you don't like sports, Valtos is also a nice place to swim, sunbathe and have a relaxing day by the seaside. Although it does not have any nightlife options to offer, walking around in the nightfall, or even early in the morning, is highly recommended. Many taverns and cafes surround Valtos beach and stay open all day. There are also some small hotels and rooms to rent right on the coastline.

The Venetian Castle of Parga

The castle of Parga is found on the top of a hill overlooking the town and was used to protect the town from the mainland and the sea. It was initially built in the 11th century by the residents of Parga to protect their town from the pirates and the Turks but it was partly destroyed by such invasions. In the 13th century, the Venetians rebuilt the castle to fortify the area. In 1452, Parga was occupied by the Turks and destroyed part of the castle, then in the 16th century it was rebuilt for the fourth time by the Venetians, who made it a strong fortress.

They built eight towers outside the castle and when the castle was sold to the Turks in 1813, it was fortified even more and obtained a new building called 'Hamam' at its top, when the harem of the Sultan would live. Today, the Castle of Parga is a great exponent of the Venetian architecture, as such architectures dominate. It has some interesting details, such as the Lion of Venice in the entrance, emblems of Ali Pasha, two-headed eagles, some inscriptions and a secret path to the sea. The location of this castle obviously provides magnificent views over Parga and the shoreline. It is also a peaceful area to go for a walk, surrounded by cypress trees and crossed by stone trails. There is a cafeteria inside the castle that offers drinks and snacks, in case you get tired, as well as some interesting gift shops to buy souvenirs. The most common way to go is a steeped street coming out from the centre of the town.