About Kos | Information About Kos| The Travel Corner
Please wait while we are searching for your accommodation ... 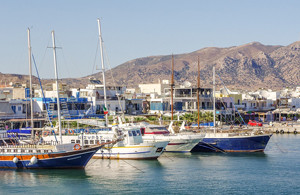 Kos is a beautiful island in the southeastern Aegean Sea. Part of the Dodecanese chain, Kos is the third largest island of this area. The capital is Kos Town, which is also the main port and population centre. It’s number of whitewashed hotels, restaurants, bars, nightclubs and sandy beaches with crystal clear waters, make the island a very popular tourist destination.

The island, which is the birthplace of the ancient Greek physician Hippocrates, also known as “The Father of Medicine”, has a very rich and colorful history, with many sights that are open to the public throughout the year. Guests can stroll through the city and find some of the most interesting and breathtaking monuments from the Roman and Byzantine Empire, the period of the Crusades and the Venetian conquerors and from the Ottoman period. Modern buildings of Italian architecture that were built during the Italian period can also be found throughout the island.

The most significant sights one must visit while being on the island are the numerous castles, like the Neranztia castle, the castle Antimachia, the Castle of Kefalos and the castle of old Pyli.

Things To Do and See in Kos

This stunning medieval castle is located at the entrance of the port. Probably constructed in the 14th century A.D. by the Knights Templar as part of their fortification efforts on the island. It owes its name to the many sour oranges that surrounded the area back in the 14th – 15th century. During the period of the crusades, the castle, alongside the castle of Saint Peter (today’s Bodrum Castle) controlled the sea way towards the holly lands. Visitors cannot miss the massive castle as it guards the entrance to Kos Harbour. They can also enter the castle by paying a small fee. Once inside, visitors can take a look at the impressive and picturesque views of the harbor, the city and the ocean.

Considered to be the centre of the contemporary city, Eleftheria Square is the meeting point for all visitors and locals as it is very close to the main port, the old city and the lively Bar Street. It is full of a long spanning history, with monuments and sights from the Hellenistic, Roman and Byzantine period, all the way to the period of the Knights of St. John, the Ottoman conquest and the Italian occupation. Guests will be surrounded by three huge buildings inherited from the Italian Era, the municipal market, the club and the Archaeological museum which has a beautiful prehistoric collection of statues and mosaic floors. As you reach the end of the square, you will spot the Defendar Mosque.

Under the huge branches of this magnificent tree, Hippocrates supposedly taught his students the art of medicine and examined his patients. It is estimated to be 2,500 years old and with a trunk of 12 metres periphery, it is said to be one of the biggest 'platane' trees in Europe. The tree is situated in the centre of Kos Town in Platia Platanou, opposite the Lotzia Mosque and over the years, it has become hollowed. A notable fact is that seeds and cuttings from this beautiful tree have been presented to many countries around the world as a gift, spreading it all over the world in many medical universities, libraries and institutions.

Located approximately 4 km from the centre of Kos Town and perched on a picturesque hill filled with rich flora and breathtaking views of the Aegean Sea, the Asclepieion of Kos is the most important monument of the island and temples of its kind. Considered to be a place of worship of the god Asclepius, who methodologically was the first doctor-demigod. According to Greek myths, he was such a talented doctor that he could even bring back the deceased. The origins of medicine lay in this magnificent monument, as it is where Hippocrates taught the profession in the school built within the sanctuary and cultivated scientific medicine.

The island of Kos suffered major damage during the great earthquake in 1933. This gave the Italians, who were occupying the island at that time, the idea to reconstruct the city’s building plan. Part of this reconstruction was the Roman Manor, also know as “Casa Romana”, a huge mansion of 36 rooms and 3 atrium's built on the ruins of an old Hellenistic style house. Nowadays, visitors are able to walk around this magnificent Pompei model house and take in its beauty and admire the hundreds of breathtaking mosaics, decors and statues.

Each year Kos celebrates St George with festival and a horse race in the village of Pyli. It begins with the procession of the Saint’s icon which is then followed by a parade of the horse riders and finishes with the race. Approximately 20 rides take place, training throughout the whole year. The priest will announce the winning horse by cracking an egg over it. The ride of the winning horse get a prize and so does the runner up. This is a remarkable custom that is very popular among visitors and the locals.

The island of Kos was under Ottoman rule for approximately four centuries, from 1523 to 1912, and the monuments that have survived till today are strong reminders of this. Two Ottoman mosques stand in the centre of Kos Town and are historical and architectural landmarks of the Ottoman rule. They do not operate anymore, but are preserved thanks to the restoration works. They are interesting landmarks for visitors to see, as they show the rich historical past of the island.

In Ancient Greece, every agora or also known as forum, was the commercial and social centre of each city. There have been many to have been excavated in Greece and the one in Kos is considered to be one of the largest. It was the centre of Kos’s finance, with numerous workshops, shops and altars. Nowadays, the Agora is part of the archaeological zone of the port. Visitors can walk through and be part of the bustling centre that once was. They will see parts of the fortification of the city, the sanctuaries of Aphrodite and Hercules, remains of ancient houses and a small part of the ancient port. A notable fact is that the largest part of the Agora is buried under the modern city.

The capital of Kos better known as Kos Town is also the main port of the island. Kos Town is situated on the north east coast of Kos and boasts a large surrounding landscape of lush greenery. The town of Kos combines architectural designs from the ancient, medieval and mordern times. Venetian buildings and well-preserved houses sit along the wide walk ways. Take a stroll through the ancient streets and unravel the historic creations and stories of ancient civilizations. The Castle of the Knights of Saint John is located in the town drawing in lots of tourists. Along the main street there are numerous cafes, restaurants, touristic shops, clubs and traditional tavernas.

30 km south west of Kos Town sits the village of Kardamena - one of the most popular touristic resorts of the island. Kardamena is well-developed, features both modern and traditional buildings spread across the emerald blue bay. There are several historic sights to visit such as the church of Agia Barbara, Temple of Apollo and the pretty church of the Virgin. Kardamena also enjoys a rich and buzzy nightlife, variety of water sport activities, restaurants, cafes and traditional tavernas.

Originally the first capital of Kos is the pretty town of Kefalos. All of the buildings are constructed close to each other forming a labyrinth of narrow walk ways, a very traditional characteristic of a typical Greek city. Kefalos houses several important sights to see such as the Folklore Museum, the ruins of Christian Basilica of Agios Stefanos and the islet adjacent to the port. The village is one of the most touristic of the island with numerous accommodation options available, gorgeous nearby beaches, cafes, bars, restaurants and traditional tavernas.