About Skiathos | Information About Skiathos| The Travel Corner
Please wait while we are searching for your accommodation ... 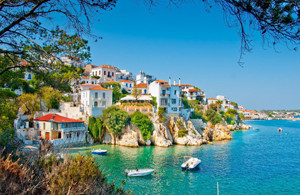 The Greek island of Skiathos is located in the northwest of the Aegean sea, in the heart of Sporades archipelago. Skiathos is one of the new islands in Greece which has never changed its name. Still today it remains uncertain as to where the name came from but one theory is that it originates from the Greek word for shadow 'skia' because of the vast amount of vegetation that grows in the island or that the island lays in the shadow of the mountains of Pelion. Culture and history are evident in every corner of the island. Skiathos is guaranteed to steal your heart due to its unique beauty, natural scenery and turquoise waters.

Renowned for its gorgeous beaches, cosmopolitan aura and buzzing nightlife. Skiathos Town is also considered to be a very popular resort in the island, where bars, restaurants, traditional tavernas spill onto the narrow sidewalks, along the old harbor and the main pedestrian street 'Papadiamanti'. In the area between the town and airport there are several open-air waterfront clubs. Skiathos enjoys totally mesmerizing and exotic beaches - the best of which are located on the southern coast of the island such as Koukounaries Beach, Banana Beach and Lalaria Beach.

The capital of Skiathos island is built atmospherically on the south east cost of the island, completed with white washed houses with coffee colour tiled roofs and narrow walk ways. It is the same town since the classical period until the Byzantine when the population of the town moved to the fortified village of Kastro seeking security. In the early 19th century, they abandoned Kastro and returned back to Skiathos Town in 1829, ever since then the population has grown and the town has increased in size.

The Queen Of The Sporades

Aside from the unique and natural beauty the island has to offer, Skiathos is also known to have a very good nightlife! Every summer, the island transfigures into a party paradise for those wishing to party from dusk to dawn in the warmth of the Medeterian climate. The best bars and clubs are situated in areas such as the Old Harbour and Ammoudia. Once you take a step back from the beaches and nightlife you will be pleasantly surprised with how much history the island holds. Skiathos Town is the home to an impressive Venetian fortress known as 'Bourtzi' which is definitely one to add to the bucket list of must sees! Additional important sites include the house of Alexandros Papadiamantis, elegant monasteries, medieval castles and hillside hiking paths.

Skiathos, a place for every type of traveler

Things To Do and See in Skiathos

There is a small peninsula that divides the port and this is known as Bourtzi. Formerly a fort, which was constructed by the Gizi brothers who back in 1207 ruled Skiathos. Bourtzi was boarded by impassable stone walls and two towers sat either side of the main gate. Presently, it is not attainable to establish the height of the parapet from the remaining ruins. In 1906, a school was constructed in the middle of the peninsula, which was funded by Andreas Syngros. Currently Bourtzi is a well-liked place for rest and recreation. The neighborhood is crammed with lush pine trees and offers breathtaking views of the surrounding landscape. There are several sites in which you can still see the remenants of the past. In the summer months many theatre and musical performances are hosted in the theatre which still stands within the premises. This is a must see!

The well-known Monastery of Panagia Evangelistria is situated within a short distance of 5 km north of Skiathos Town. The monastery is constructed on the slopes of the mountainous countryside and is surrounded by pine forests and fur trees. The Monastery of Panagia Evangelistria is considered to be the most religious centres in the Sporades and definately the most important in Skiathos island. The Monastery underwent construction in 1794 and was finalized in 1806. During the period of the Greek Revolution in the 1820s the Monastery of Panagia Evangelistria played a significant role in providing both shelter to the fighters and refugees along with offering money for the economic support of the Revolution. Currently, in the monastery, a small ministerial museum exhibits priest clothes, rare books and documents, manuscripts dated back to the 17th century, gospels of the 18th century, Byzantine icons and other ministerial items.

Are you sea lover? If so visiting the sea caves of Skiathos is most certainly one to add to your list. Nearby the beach of Lalaria (which is located on the north coast), known to be one of the most photographed beaches in Greece are two gorgeous sea caves, Galazie and Skotini. The cave of Skotini 'The Dark Cave' is identified by its low and narrow entrance where only a boat can pass through. Whereas Galazia 'The Blue Cave' is much bigger in size. Its superb reflections on the rocks and its rare beauty are quiet mesmerizing. Both of the caves are accessible by boat as well as swimmers and divers who enjoy the underground landscape. The two sea caves are renowned as nature's most astonishing creations and are among the most pretty sights of Skiathos island and should not go missed.

The town was strategically constructed on a rocky hilltop cliff which literally hangs above the seashore on the northern coast. The cliff is conspicuous by its enormous height and it was a prime location for the protection for the people who lived in the Castle town. Within the castle stood 22 elegant churches and 300 dwelling units. Some of the present day excursions which are carried out are the impregnable town walls, the drawbridge, Turkish baths and the few churches which still remain intact all of which make visiting the Castle a worthwhile experience.

The home of one of the most prominent Greek writers 'Alexandors Papadiamantis (1851-1911) is located in the Town of Skiathos. Constructed in 1850-1860 by the author's father, the house has a simplistic style and design with minimal furniture and family items. Several years after Papadiamantis death his house was declared as a preserved monument by the Greek Ministry of Culture. The house of writer has now transformed into a museum dedicated to his life and work. The museum is situated on a narrow walkway within a short distance from the port via foot. The building is an example of the traditional architecture and character of this gorgeous island.

Nearby the Sea Caves of Skiathos is the famous Lalaria Beach. Only accessible by boat which depart from the port of the Capital of Skiathos. Lalaria is hands down one of the most tranquil and mesmerizing beaches of the island with its white sandy shores, crystal clear turquoise waters and dramatic white cliffs rising out of the sea. Beach lovers don't let this go missed!

While visiting the pretty island of Skiathos it is a must to visit the most famous beach best known as Koukounaries. It is renowned for its extremely fine white sand and its lush vegetation in the surrounding landscape (it is a protected environment). The beach offers water sports, sun beds, parasols and beach bars. Take a short stroll into the region around the beach and you will find a variety of restaurants, traditional tavernas and accommodation options. A local bus service runs from the beach to the Capital approximately every 40 minuets making it extremely easy to reach.